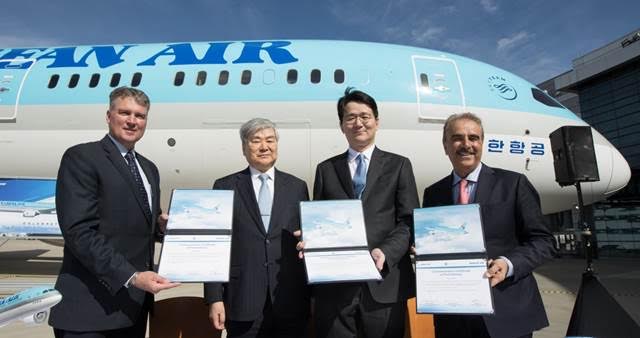 Korean Air today celebrated the delivery of its first 787-9 Dreamliner at a ceremony held at the aircraft manufacturer Boeing’s South Carolina assembly site. Korean Air will be the first Korean carrier to operate the Dreamliner in South Korea.

The airline is scheduled to launch domestic flights between Seoul’s Gimpo Airport and JeJu for a month as part of the required certification period, before launching long-haul international routes from Seoul’s Incheon Airport to Toronto, Madrid, and Zurich later this year.

“The 787 Dreamliner will be a key member of Korean Air’s fleet as we continue to introduce next-generation airplanes to our customers” said Walter Cho, president of Korean Air. “The aircraft is fuel efficient, quiet, has lower operating costs and it’s spacious and very elegant. The cabin features are impressive and will ensure maximum comfort for Korean Air’s passengers.”

Korean Air is scheduled to introduce five 787-9 Dreamliners to its fleet this year, with another five joining the fleet by 2019.

“This milestone delivery adds yet another chapter in our long and successful relationship with Korean Air,” said Rick Anderson, vice president of Northeast Asia Sales, Boeing Commercial Airplanes. “Korean Air continues to demonstrate its leadership in the global commercial airline industry and we are confident that the market-leading efficiency and comfort of the 787-9 Dreamliner will build onto their long-term success for many years to come.”

The Boeing 787-9 Dreamliner is an integration of cutting-edge technology developed by Boeing utilizing its accumulated production knowhow. The 787-9 is well known for being an eco-friendly aircraft with 20 percent less fuel use and 20 percent fewer emissions than the airplanes they replace. The ultra-light, fuel-efficient aircraft is made of composite material; it also has higher cabin humidity, wider windows and a higher ceiling, which altogether create a more comfortable atmosphere for passengers.

Its wing design is also particular utilizing raked wingtips to increase aerodynamics leading to fuel efficiency. The engine is also designed to be eco-friendly by adapting a new technology for cowl which is used to cover the engine. This significantly decreases the noise from engine slipstream, which brings greater comfort for the passengers. Another notable technology for the Dreamliner is that whenever the plane encounters turbulence, it has automatic system to detect such change in atmosphere and to adjust flight status to reduce sudden cabin movement.

A remarkable fact is that Korean Air’s Aerospace Division is a Boeing partner on the 787 program, suppling the aircraft components for the model. The carrier’s Aerospace Division has been manufacturing six core parts, such as raked wing tips, after bodies and flap support fairing, for Boeing 787 since 2006. Korean Air is also the partner on the 747-8 programs and one of two suppliers producing the new 737 MAX Advanced Technology Winglet.